On Saturday we headed over to Whitby for the well known Steampunk Festival.

I’ve been to a few of these in the past and always love to admire the costumes and skills of the people who attend. I always feel inspired to be crafty afterwards but then remember I’m really bad at everything like that! Haha

But this was my first event in Whitby. I went to Goth Weekend in October which you may have read about here but that didn’t involve awesome stalls like this one.

So we headed off for Whitby Saturday and decided to stop off for some lunch on the way. We couldn’t have ended up at a more perfect place for a quick stop. Steam and Moorland Garden Centre what a little gem nestled just outside of Pickering!

The place was absolutely lined with flags from all over the world. My favourite part – two mini steam trains running on a track that took them on a loop around the restaurant. What a cute little added touch. The place was a peaceful setting and the food was good. What more could we ask for? 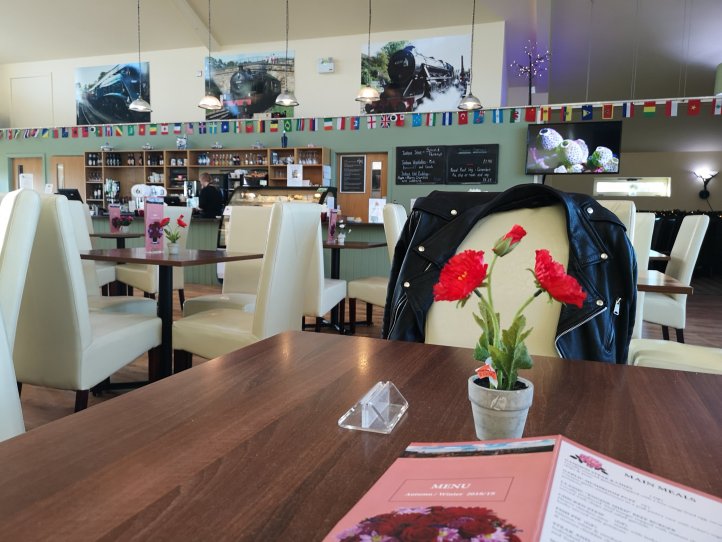 After this we headed for our B&B on the outskirts of Whitby. We stayed at Wilson Arms which is located around 3 miles from the Abbey. It’s a quiet little pub with 7 rooms for guests and was very empty when we stayed here with it being out of season. From our window we had far reaching views that extended all the way to the coast.

I’d stay here again and recommend the place if you don’t want to pay too much more for a central location. The rate even includes breakfast and some furry friends to greet you in the morning!

After checking in we began the (in our opinion) short walk into Whitby through Ruswarp. I really enjoyed this walk because despite a lot of it being on country roads, the views were nice and the second half involves walking along the River Esk and underneath the pretty Larpool Viaduct.

When we arrived in Whitby we had missed all the action and it was already dark but never mind, we’d eaten and we were happy! A short play on the arcade machines before we found ourselves in the pub. With every intention of doing a mini pub crawl, this soon became us settled in a Sam Smith pub in front of a toasty fire making new friends and not wanting to go anywhere else!

That’s the beauty of travel, always meeting new like-minded people. Especially Whitby as it is one of those places that really does remind me of being abroad because everybody is so friendly and you are guaranteed to get talking to people.

Sunday came and we were up bright and early for our breakfast at Wilson Arms, ready to start the day.

Whitby is a little bit quieter out of season of course, so there is free parking around the place. We parked up at The Pavilion where the event was due to take place.

An hour spent walking around all the stalls and admiring the costumes filled us with wacky inspiration for what we could wear next time.

I bought a few keepsakes from some of the sellers ready to build up my own collection.

I really admire how much effort some people put into their work for events like this. If you’ve never been to a Steampunk event before, maybe you don’t think it will be your thing perhaps, but give it a shot. Even if it isn’t your style you’ll be sure to be impressed by something with the amount of contraptions on show.

After the event we explored the little shops of Whitby. Of course no trip to the seaside is complete without a visit to the chippy!

Looking forward to heading back in Summer since both times I’ve been now it’s been very cold and extremely windy. As my partners favourite place to visit in England I’m sure I can get used to coming here every so often for a nice little seaside break. 🙂

This month I got to visit Cambridge for the first time. Loved it! You can read about my trip on my blog >> Link in bio 😊 sophiebeau.com
Don't underestimate the beauty of a few trees ❤️🌲
For me, nothing beats a good walk out in in the countryside. Breathtaking views, fresh air and exercise do absolute wonders for you mentally and physically 👌
Scotland 🏴󠁧󠁢󠁳󠁣󠁴󠁿 Always beautiful! ❤️
Blair Castle 🏰🌿
Back where the sun is always shining and my face is always smiling ☺❤️ #salou #travel #espana #spain #palmtrees #salousign #beach #yolo #myfaveplace
Still waiting for the clouds to clear and it to get warmer here in Yorkshire!
Scarborough looking fabulously blue at the weekend 🌊☀️ New Post on my blog >> Link in bio!
Love a good walk on a beautiful Autumn's day ❤️ #autumn #bradford #walking #travel #ramblers #reservoir #chellowdene #beautifulplaces #landscape #uktravel #yorkshire