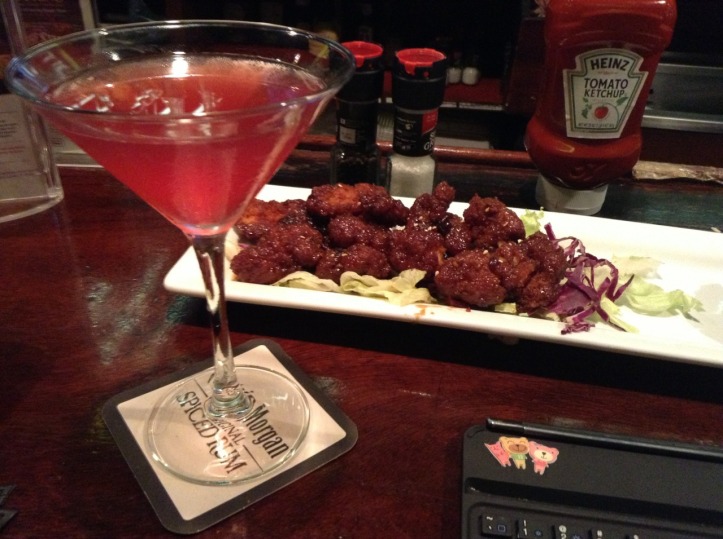 I’m currently sat at the bar of a TGI Friday’s in Lower Manhattan with a cosmopolitan enjoying my last few hours in New York. This will be the last entry I make from the United States. My flight to London is in just 7 hours and I must say I’m very excited.

These last 2 days in New York have been the cherry on top of a very exciting and adventurous cake. After visiting New York in May I thought I was tired of it, but coming back when it’s 30 degrees outside really reminds me of how much Manhattan has to offer and why I love being here.

I arrived late yesterday and rather than waste the evening, I headed to Times Square for one final time to enjoy the atmosphere. It was real exciting. I was going to treat myself to a fancy meal but ended up in a 99c pizza store. They can say what they want about New York pizza, I love it and you can’t go wrong at that price. I ended up staying for an extra slice and chatting to some guys who run the bus tours. They were trying to get me to go on one but please, no more tours!

Headed back to the hostel to get ready for a night out in Greenwich. We didnt actually leave until 11pm so I didn’t stay out for very long after realizing how early I’d have to be up today. Ended up getting home at 2am only to be forced outside of the hostel by a fire alarm at 3am. It took 5 fire engines and an NYPD car to figure out it was a false alarm.

This morning I gathered my stuff together to check out of the last hostel I’ll stay in for a long time! I joined the hostel tour of the Bronx and visited the Yankee stadium alongside the rest of the neighborhood. Whilst the tour wasn’t brilliant, I did meet a guy who also majored in journalism and he told me about his adventures in India. He was supposed to head to Washington DC next but I warned him that the shutdown would make it..not so fun.

After this I headed down to lower manhattan to see my favorite part one last time. The subway train I got on however didn’t go too far down so I ended up getting off at the World Trade Center. I visited the new store that wasn’t there in May. I paid my donations then made my way down to Wall Street and that is where we end up where I started – in TGI’s.

I stayed there for a while enjoying my last bit of time and I was joined by a businessman. We had a conversation about things but it turned out to be more of a debate in the end. As a Wall Street businessman he figures USA is the greatest country ever despite never being to any over country so not really being able to form a real opinion.. He doesn’t care about the fact people don’t get holiday pay or that people can’t afford health insurance because he doesn’t have to worry about those things himself. It’s bizarre. I hope that if I ever become a businesswoman, even if I’m a big shot in the big city, I never lose sight of what is happening to others around me who aren’t so fortunate, because really we all start somewhere.

And now I’m on the subway heading back to my hostel to pick up my bags. It is from here that in the space of 12 hours I’ll say goodbye New York, hello London.

Still waiting for the clouds to clear and it to get warmer here in Yorkshire!
Scarborough looking fabulously blue at the weekend 🌊☀️ New Post on my blog >> Link in bio!
Love a good walk on a beautiful Autumn's day ❤️ #autumn #bradford #walking #travel #ramblers #reservoir #chellowdene #beautifulplaces #landscape #uktravel #yorkshire
C'an Pastilla Beach looking very quiet in 2020 😷
Exploring the old town of Palma today.
This week I'm in Majorca for the first time! Today I'm out exploring Palma city. If anyone has any recommendations for whilst I'm here that would be fab 👍
Not a soul in sight 👀
The last sunset of my 20s >> Had to be a good one 💕
Greek Islands in the not so far away distance 💙