​Our final day with the group today and we said goodbye to the home stay to head to the city of Saigon! It was another long journey but because we were leaving early we could reach the city by 12. This time we had a much bigger bus and so we sat at the front as I like to watch the roads. First thing we noticed was the amount of swerving and times the bus driver has to use the horn. The guide told us that in Vietnam the horn is just used regularly because of all the traffic and motorcycles.

​On our way to Ho Chi Minh City we drove through the Mekong Delta and took a boat journey to see the floating markets. It was a fun experience but quite similar to the floating village we saw back in Cambodia a few days ago. We did buy a yummy iced coffee from one of the sellers though and get to see some locals cut pineapples which requires more technique than you’ve probably thought about.

​The bus journeys on the tour all seemed to go so much faster than I wanted. I had a book prepared and plenty of music but normally ended up sleeping or staring out the window the entire journey! So before we knew it we reached Ho Chi Minh City and were checking in to our next hotel. It was back to one double bed in the city as apposed to the three doubles we’d enjoyed in all the other rooms! Of course we didn’t mind this as the hotel was nice and we’re perfectly small enough to both fit in one double bed!

​As today was our last day together as a group we were sure to make the most of it. To begin we headed for lunch at the local markets. This was different to any of the other markets as it was more like an outdoor food court. It had food from all over the world so of course we chose Indian. Glad we shared a curry as with 2 garlic naan breads we were full and happy! Indian food is always different abroad, the curry wasn’t like any of the standard Indian dishes in England so was good to try something new.

​One of my highlights of the trip came next with the Saigon Cyclo City tour! I didn’t know what to expect from this and when they said we were heading to the War museum first I wasn’t too happy about this as it would eat in to our time in the Cyclo. We spent an hour at the museum which wasn’t long enough, definitely needed more time here. I’m glad we got the chance to explore this as seeing the effects of the Agent Orange was quite shocking.

​After the museum we hopped on to our cyclos. If you don’t know what a Cyclo is well you can see it in my photographs. It almost looks like a wheelchair! It has a seat at the front that you sit in and someone behind you will cycle you around. Can’t say I’ve seen them in many places and it was definitely my first time on one! 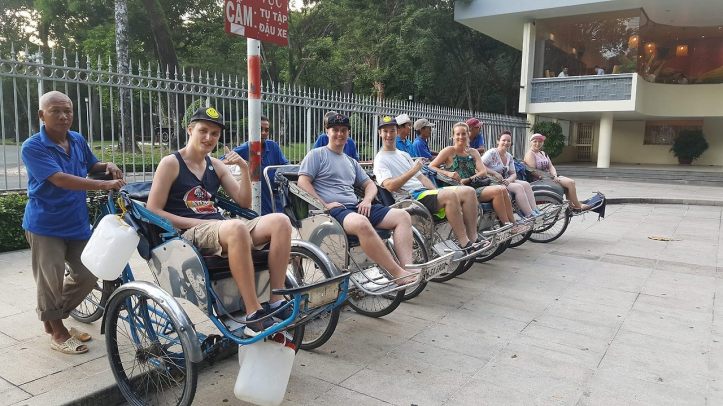 ​It was such a great way to explore the city as you got to be part of the traffic and experience the madness but without actually having to drive yourself. It felt completely safe but was thrilling as you knew it couldn’t possibly be 100% safe as drivers are unpredictable! We got to see all the main sites such as the palace, post office and various other things that I must admit I didn’t pay too much attention to as I was enjoying the tour too much. It was a lot of fun racing each other on the streets. I’d highly recommend this as a way to see the city! 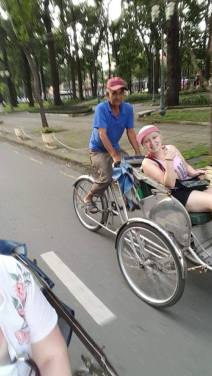 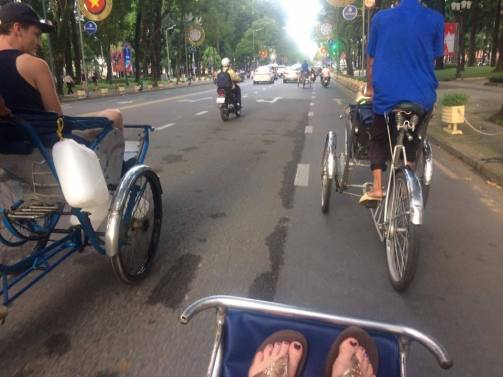 ​After the tour we headed for dinner but the Indian food was so filling that I actually just ended up ordering a portion of rice. I had my most expensive cocktail here at around $5! The cocktail was okay but not the best I’ve had on the trip. My fave was definitely ‘Star Wars’ in the local bar on Sihanoukville beach made with amaretto, lemon juice and pineapple if I remember right! The dinner was a nice farewell meal however and a starter for a farewell party night.

​After dinner we were taken to a Western bar that was obviously a tourist bar that groups are normally taken to. Unfortunately for me, the trip has included too many western bars and it’s not my thing. I like local bars with local people, cheap drinks and even live music. I’m looking forward to heading to Hanoi and going in a few of these with just the two of us.

​The bar we ended up in on this night was so majorly expensive that we got 1 drink each but I refused to buy any more. A beer came out at around $3 which is a lot of money in a city where drinks shouldn’t be more than $1. Luckily there was a bunch of others in the same position. We left the bar and 5 of us wandered the streets looking for cheaper bars. We didn’t have much luck as we didn’t seem to have a clue where we were going and kept hitting the popular tourist bars. In the end we settled for buying a few bottles from the local supermarket and drinking on the streets! Doesn’t sound classy but is actually quite normal out there and we had such a laugh! We ended up sitting on a bench where rats were literally everywhere running circles around us! Something that will probably always stick in my mind actually.

​We bumped in to the rest of the group later on in to the night and ended with some more partying. It didn’t top the great first night out we had in Bangkok but that might be something to do with the fact I haven’t been able to get drunk since that night!

Back where the sun is always shining and my face is always smiling ☺❤️ #salou #travel #espana #spain #palmtrees #salousign #beach #yolo #myfaveplace
Still waiting for the clouds to clear and it to get warmer here in Yorkshire!
Scarborough looking fabulously blue at the weekend 🌊☀️ New Post on my blog >> Link in bio!
Love a good walk on a beautiful Autumn's day ❤️ #autumn #bradford #walking #travel #ramblers #reservoir #chellowdene #beautifulplaces #landscape #uktravel #yorkshire
C'an Pastilla Beach looking very quiet in 2020 😷
Exploring the old town of Palma today.
This week I'm in Majorca for the first time! Today I'm out exploring Palma city. If anyone has any recommendations for whilst I'm here that would be fab 👍
Not a soul in sight 👀
The last sunset of my 20s >> Had to be a good one 💕